Stop and look around.  Interesting people are everywhere!

Republished here with the approval of AROUND WOODSTOCK, “Our Woodstock Neighbors” April issue, 2018, by Leigh Cutrone. 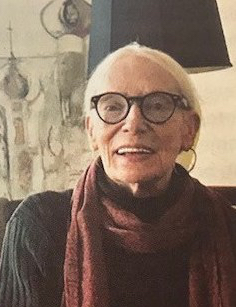 Once in a while we meet someone with whom we just click.  That was the case when I met this dear woman.  We just happened to be next door neighbors when I moved to downtown Woodstock.

Simply put I was fascinated by her.  She is quite a lovely lady.  She has the most gorgeous blue eyes which are full of life along with a sense of humor that would make anyone smile.

Her full name is Marita Hallberg Walsh.  Born in Sweden in 1943, she was the only child.  She still remembers the food shortages resulting from the German blockades.   But her parents came to the United States looking for a better life which they found in Brooklyn, NY. where Marita grew and began her love of art.  Her father was a fresco artist so, perhaps,  Marita inherited that flair early on.

Parsons School of Design accepted Marita and with several scholarships under her belt she graduated with a Graphic Arts degree from Parsons.  This is impressive since today only about 35%* of applicants are accepted.

Graphic art was Marita’s forte’ which took her into the advertising world.  In fact, her first job was in an advertising firm in NY in the 60’s.  Remember television’s, ‘Madmen‘??  Was this world accurately depicted?  Actually, Marita said the men were.  The women, in her experience, not so much.  Women were typists and stenographers.  Not any room for a Peggy becoming an advertising executive in those days nor for a Joan Holloway rising to part owner of the firm.

The young and married Marita lived in the West Village of New York.  She ‘painted’ me a picture of the West Village as an area where the aspiring musicians, actors, and young artists lived and socialized.  Marita, in fact, knew Bob Dylan‘s girlfriend, Susan Rotolo.  Suze and Dylan lived around the corner. Suze actually was pictured on Dylan’s 1963 album, ‘The Freewheeling Bob Dylan’.  It must have been fascinating living there then.   I can picture Marita with her blonde hair and bright blue eyes walking along Bleeker St and running into Suze and Dylan.

Marita has always had a love of traveling and adventures.    Marita has been to 19 or 20 countries (but who is counting?).  Always independent with a sense of purpose.  With each move (and there were many) came a “new adventure”.  “It was fun” and along the way she has met Woody Allen and Woody Harrelson.  With a bit of wistfulness, Marita mentioned she may not have actually worked FOR Any Warhol but she was close enough to “touch his robe!”

Marita and her husband moved to downtown Woodstock about 6 1/2 years ago and has had no regrets.  Woodstock suits her lifestyle and she has no plans to move anytime soon if ever.  Today she paints and is humble about her work as she pointed to a painting she was working on in the corner of her living room.  The easel was beautiful as was the painting.

I asked Marita if she had any advice for the younger people starting out in their careers.  She was quick to answer.  “Work hard and put down the phones!”

“Any regrets?” I asked.   “Anything on your bucket list?”   Marita had to think.  Maybe not a regret but a ‘wish’.  She still wishes she had landed that job with Lou Dorfsman.   She explained that Dorfsman was a graphic designer who was hired as the Director of Design for all of CBS in NYC. Marita informed me that Dorfsman was responsible for everything and anything that had to do with design (print advertising, marketing communications, etc.) for CBS…”down to the design of even the pencils”.  We agreed she may not have had half the adventures in her life if she had landed that job!

As Marita enjoys everything Woodstock, we all should be happy to have her living among us.  Cheers Marita!