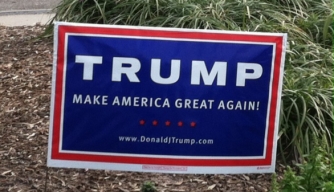 This man comes to the political scene without any experience.  He is an enigma.  No one can understand his rise in fame.   I, too, am really surprised.  Shocked really. No one admits to voting for him but here he is….the ‘winner’ of the SC primary even though he won with only 32.5 percent of the vote.

But, you have to figure that we the people are just fed up!  Fed up over many many things in this country.  I figure this is the way “We The People” are fighting back.  But it is a joke on us.  Can we just start over?  Throw them all out and let’s start over again.    We should just ask for a ‘do over’.  I call it!  Do Over!!

It has been very interesting being in South Carolina this month.  Lots of buzz and lots of political signs all over the place and the ads …… whoa!

We attended a Kasich town hall meeting at a local restaurant last week. We waited for him for over an hour or so.  He, apparently, was coming from another part of the State.  He did thank us all (500 of us) for patience.  Who says I was patient?  Not really.  I wanted breakfast at this restaurant and I noticed many had, indeed, eaten breakfast and many had a cup of hot java in front of them!  What the heck?  Couldn’t they have served us coffee also?  Standing room only but that’s ok.  I can take it.

Kasich seems to be a very decent human being.  Apparently he has done a very good job in Ohio and Ohioans(?) in line seemed to say they liked him.  I know my husband has been on his band wagon since Day 1.  We both know he will never be the candidate.  He needs to give it up!  Say goodnight friends!  Adios! Thanks all!  Take the hint!  H E L L O??????

Ok, I do agree with him on some things like the flat tax but he says to get things straightened out in this country we have to give up some things.  WAIT!  Give up some things?  Like what exactly?  I want things to change in this country for the better but don’t you or anyone else mess around with increasing taxes and definitely no messing around with my little Social Security check!  Just don’t!  Period.  I’m retired, after all, and we are on a budget.

Oh wait, this is supposed to be about Trump.  What can I say really?  We just had to go to the Trump rally on Friday.  I had to feel it and be one with it.  OMG!  The line going into the Sports Center!  Thousands of people in line patiently chit chatting about almost anyone but Trump!  Odd.  I knew going in though I had to be quiet.  I didn’t want to get mobbed by the Trump supporters.

Many bought a hat or a pin or scarf being sold by hawkers with the Trump name on it and as we got closer and closer to the entrance, everything got less expensive.  I really wanted to buy something (shopper that I am) but I resisted.  I mean, what do you do with a Trump hat after the election?  Hide it?  I am quite proud of myself resisting the urge to buy.

We got in without fail and we felt victorious.  The music was blaring over the loud speaker!  I really enjoyed all the music.  I felt like dancing and I thought “Wow, what a party we could have in here with this great sound system!”  I decided to ‘bop’ …. you know the movement.  Somewhere between actually dancing and not standing still….with that head movement side to side and up and down.  You know!  We were enjoying it all.  “Hey,” I thought, “Maybe one of those news people will take my picture with my head bopping!”  One could only hope.

The crowd was diverse.  Mostly my age I think but surprisingly some younger folks.  I don’t know if they were dragged in by parental units (as my daughter likes to say) or maybe grandparents but there were lots.  Also a lot of Vets.  I could understand that since they have been treated badly.  Always have.

The good head bopping music died and something like coronation music came over the loud speaker.  People seemed to know this was the ‘Trump is coming’ music!  Sorry, didn’t recognize it.

Trump was due at Noon.  At 12:04 Trump came onto the platform with no introduction by anyone.  Nor did he share the stage with anyone.  Fitting I suppose when you think about it or maybe he couldn’t get anyone to endorse him in Myrtle Beach.  No matter.

The thing about Trump.  He never is specific about his intentions but it is just one big complaining session. What he says hits a chord among people and their annoyance at  our government at large.  He didn’t go off script.  I have heard and heard again what he says about the Chinese, the Koreans, the Mexicans and the building of the wall……he rants and rants and people cheer.  I get it.  I do.

I realized something that day also.  He is salivating over NEGOTIATING contracts.  He LOVES the thought of being given the opportunity to negotiate the hell out of other countries for the benefit of these United States of America!  A ha!  I had this epiphany while listening to him say the same stuff.  But, I thought, what will he do as President while he isn’t negotiating?

Will he got bored if he isn’t?  Negotiating, that is.  When he has to travel to other countries will he tell Putin, for instance, to “shhhhhh” while he is in the middle of his negotiations?

Other observations.  He looks very healthy.  Supposedly he doesn’t drink and smoke.  You can tell by looking at him.  His hair on this day was not that God awful Orange.  It  was ‘normal’.  He looked great.  Always a nice tie (wonder why?)  Are his ties made in China?

He didn’t make those silly facial expressions and I, for one, was thankful.  Can’t tolerate those.  The crowd was respectful but for one or two hecklers.  Trump told whomever was in charge of removing the hecklers to “get them oughta here” and “don’t hurt them, just get them out!”  I thought that was kind of Trump asking the fellas to not hurt them.  Very nice.

We didn’t last long.  After the music and after the hecklers were moved out I sort of lost interest.  My lower back was hurting and I had to stretch or sit down but preferably the latter.  Sorry Trump!  Gotta go!  I wasn’t feeling one with any of it anymore and I was definitely out of the moment.

The Trump Train.  Still am shocked about it all but I do get it.  Anger, frustration, amusement, celebrity……Is this where we all find ourselves?  How did we get here? I’m a bit sad over it all but more important I really want to know  how the heck does Trump keep that combover in place?  Two sided tape?

I’ll never know and I don’t know what our country would look like with the likes of a Trump as President.  You can’t say it is a ho hum political year that’s for sure! 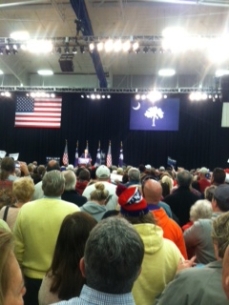